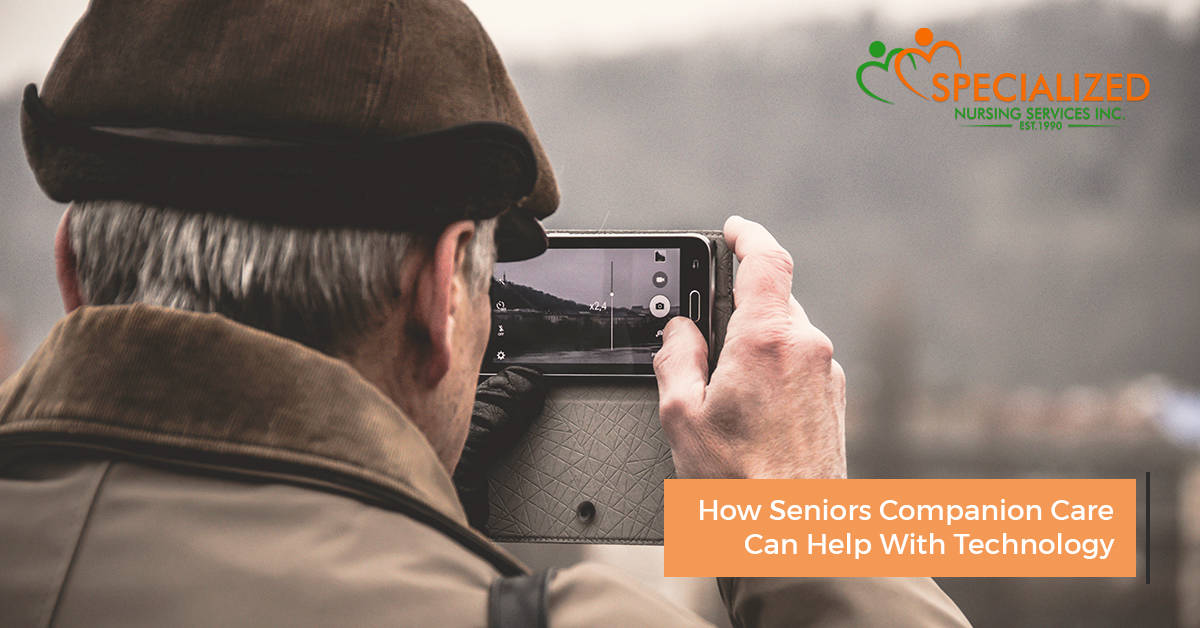 How Senior Companion Care Can Help With Technology

Two decades ago the big joke was that every time a comedian would visit their parent, the VCR clock would be flashing “12:00. 12:00. 12:00,” It’s as if the fact that their parent couldn’t set the time on the VCR was some indication of how smart someone was. The joke only went away when VCRs did. Take that, VCRs, the seniors outlived you!

Let’s give seniors some slack when it comes to electronics, shall we? Many remember the ice box, which literally had ice in it as the means to keep the food cold. Today, their refrigerator might have a TV screen on it. While most seniors wouldn’t want to go back to that original technology, they can be intimidated now that everything, including the toaster, has microchips. With our companion care services for seniors, we can help them navigate the world a little easier by helping them with the following.

Think about what a person who’s ready for at-home care and companionship has lived through when it comes to television. Some grew up before television even existed, and if they grew up in a small town it’s unlikely they ever even saw one until they were in their teens. At that time all you had to do was turn the knob and maybe adjust the rabbit ears. When remote controls were invented, such as the Zenith Space Command, the “clicker” only had four buttons, which was pretty easy to understand.

But as televisions became more complex, so did the remotes. While a television was once just a television, it now has multiple inputs for a variety of sources. Cable just adds an entirely new level of complexity to the situation. Take a look at your average cable television remote control and it has at least 40 buttons to deal with…most of which go unused by the average octogenarian!

So when you realize the eras during which those needing elder care services have lived, it becomes pretty obvious why the remote seems so complex to them. (In fact, it seems like most people, no matter their age, are bewildered by most of the buttons on a remote.)  So why are we so good at figuring them out? Well, it’s part of our job! Our home companions have helped many people figure out how to make the most of their television and can highlight the only five buttons they’ll even need to worry about.

While we’re very happy to provide senior companion care to our patients and customers, we can’t be their only connection to the outside world. They still want to stay in touch with family and friends via email, because they’re certainly not going to give up letter writing after all these years.

Many of the seniors we care for grew up in the age of typewriters and the only mice they knew of were the ones you set traps for. The biggest problem isn’t teaching them to use a computer but getting them interested in doing so. The good thing is that seniors can catch on very quickly when it comes to using a computer for simple tasks.

Who knows, maybe our next at-home care client will be the next star of Twitter, but it’s much more likely that they’re just more interested in being on Facebook. Facebook helps them feel like they’re part of a community of people they’re related to or have met over the years, even if they never leave the house. It’s yet another way that those who might not be well enough to go outside very often can feel connected.

While there are many ads out there in AARP magazines for flip-phones with oversized dialing buttons on them, some seniors are more interested in something a little bit more advanced. And it makes sense that they’d be interested in a device where they can participate in the emailing and social media noted above without having to get up and sit at a desk.

With smartphones and tablets, seniors can relax in their comfy chair while they keep in touch with loved ones. For those who are undergoing some sort of home healthcare treatment (such as a blood draw or chemotherapy treatment), the device can also be a great distraction. We’re not saying we’ll be able to hook up the wifi for them, but we can certainly help them navigate the most popular types of phones and tablets out there.

We’re more than happy to give seniors the teaching they need to stay in touch with the outside world, whether that means getting to CNN from their television remote or helping them stay in touch with friends and loved ones on social media. It’s simply part of the senior companion care we offer.