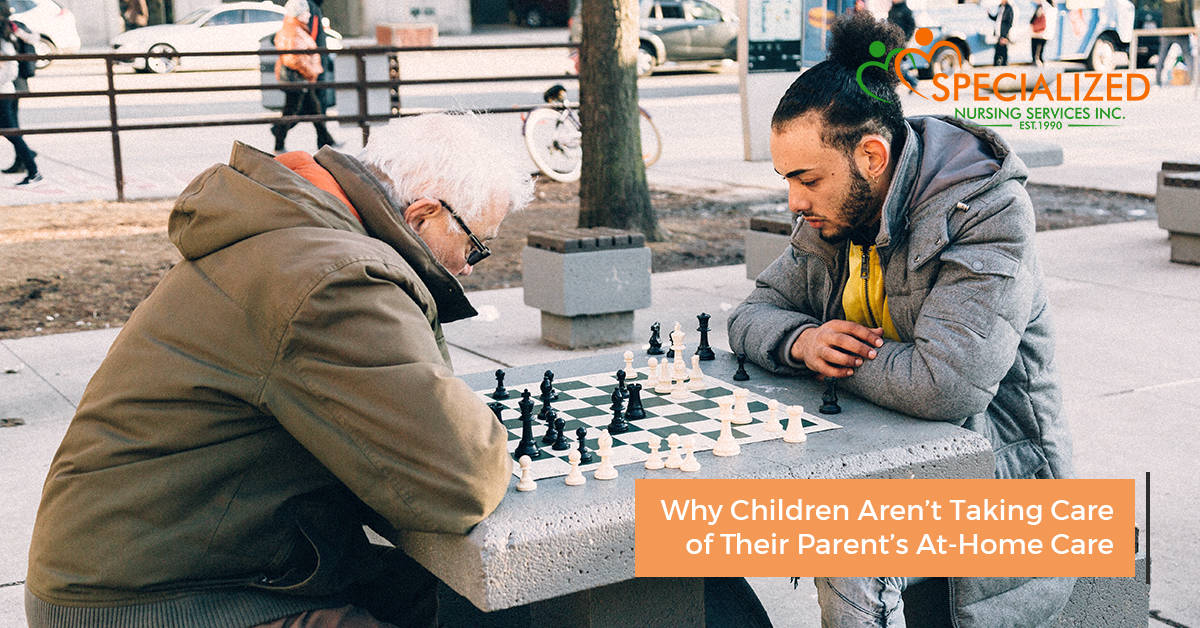 One of the most beautiful and emotionally-haunting films ever made is Yasujirô Ozu’s Tokyo Story, made in 1953 just eight years after World War II ended. It deals with an elderly couple and how Japan’s attitudes toward seniors changed as the country rebuilt after the war and became more Westernized. The longstanding reverence that children had for their elders was fading, leaving many seniors to wonder what the future held now that the eldest child no longer felt the need to take the honor of caring for their parents in old age.

While multi-generational households were once common in America as well, that’s all changed. Why the change? We believe there are many reasons that at-home care and home healthcare services are falling to professional providers. Let’s take a look.

Let’s start off with the most obvious reason that a senior’s children aren’t assisting with at-home care: there might not be any children. It might be because the senior never had a child and didn’t adopt. The need for senior care will only increase in the coming decades as more Americans choose to not have children.

Another possibility is that the child has passed away, whether when they were young or because of a disease. As people live longer, they’re more likely to see a child pass away, even if the child is “only” 70 years old and leaves a 90-year-old parent.

Another reason that seniors might have to seek out their own home care is that they may no longer be in contact with their children. Sometimes it’s the fault of the senior, other times the child. Most often it’s a combination of the two that could never be resolved.

The American Spirit of Independence

America, for better or worse, has always glorified the idea of independance. After all, one of our most important documents is the Declaration of Independence, a piece of writing that told England that we were ready to govern ourselves now, thank you very much. That feeling of independence lead people to go off and tame the West, whether the West wanted to be tamed or not. We glamorize the idea of the lone cowboy, the lone wolf, the action hero who doesn’t play by anyone else’s rules!

Because we live in America, we’re susceptible to this underlying idea of independance. Parents tell their children “you can be anything you want to be. Get a job you love. Follow your dream.” The fact is, most of these things are going to take their children away from the parents, because if the dream is to work for Apple then you most likely have to move to California. Children also move away just to prove that they can make it on their own, without the direct help from mom and dad on a daily basis.

Of course, mom and dad were also susceptible to the idea that they should be independent. So while they might need care, they don’t want to admit that they are in need of help, even after their spouse dies. If they hire someone to help them for senior companion care, at least they’re purchasing services instead of asking for help from their children. Needing help from their own kids can be a hit to the ego. They might even refuse help if the kids offer.

You could blame a child moving away for the reason they won’t be providing home care for their parent. But often it’s the parent who leaves as they…

It might not be the kids who left the area, but the seniors themselves. Florida has many draws that make it easy for seniors to make the move, not the least of which is the year-round warm weather.

While Florida has many draws for seniors, it’s not always as appealing to younger generations (aside from time spent at amusement parks or on vacation, of course). A grown adult who has roots in a community really can’t be expected to follow a senior parent to Florida just to provide care for them. Some do, but it’s rare. Instead, it just makes a lot more sense for a child to assist remotely by helping a parent pay for a home care agency.

Americans don’t like to think about aging, and we certainly don’t like to think of it as it relates death. It’s hard to face our own aging and mortality, and that causes many of us to avoid it as much as possible. There’s no doubt that many children avoid helping with their parents’ home care because they’re scared of the idea that their parent might not be around for much longer.

While Medicare is usually reserved for shorter in-home healthcare needs, those who are eligible for Medicaid might just have their home care taken care of. If that’s the case, their children won’t be needing to take care of daily tasks. Of course, they’re always encouraged to visit as much as possible!

Maybe The Children Are Helping

Home care services offers a wide range of options when it comes to the level of attention a senior gets. Some just need us for an hour to take care of light cleaning and medication reminders. Others might have us there during the workday to engage in more social activities like hobbies and games.

But there are levels of care that mean we’re not always there. The fact is, some children are helping with their parent’s home care needs, and we’re there to take care of particular times of the day. After all, even if a parent is living with the grown child, their child still has to go out and make a living. We’re more than happy to offer our companion care service for seniors while their kids are away for part of the day.

There’s another big reason that the children of seniors, even if they help with the care, need the help of at-home healthcare. That’s because…

So, let’s say that both the children and the parents live in the same town and that they’re able to help with some care. They’ll be able to help with laundry and dishes, and they might even be able to take care of simple medical needs. But some needs are well beyond that of anyone who doesn’t have a doctorate or nursing degree.

People are living longer, and as such their needs have grown. Home healthcare can provide substantial care at home, including in-home chemotherapy, injections, lab draws, management of diabetes and heart failure, and care after a stroke.

As you can see, there are many barriers that can prevent a child from providing home care to their senior parent or parents. Good thing there are specialists who can provide the elderly companion care they need.

PrevPreviousWhy Elder Care Services Are The Perfect Transition To Assisted Living
NextWill Medicare Cover The Cost of My In-Home Healthcare?Next