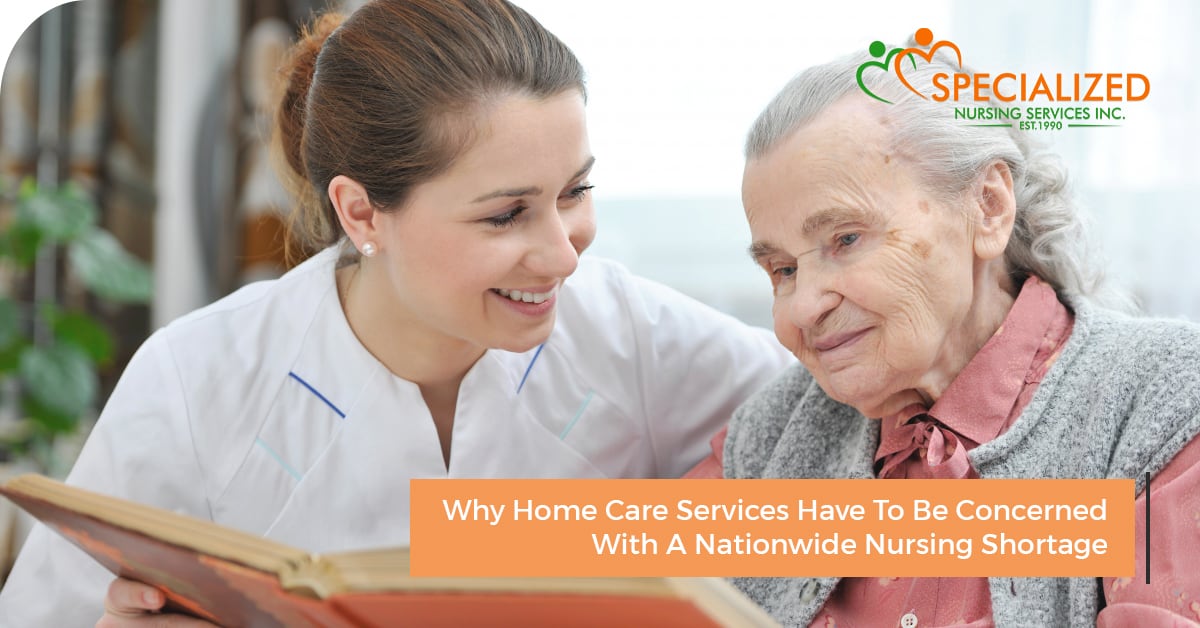 You’ve probably heard that there’s a coming nursing shortage, and by some estimates there will be a shortage of over half-a-million nurses over the next five years. That’s not saying that we need nurses to help half a million people…it means our country needs half a million new nurses! Those nurses will be helping millions of people across our nation.

While that number might sound impossibly high, there are many factors that have lead to the need for more nurses, and it’s certainly something that home care agencies like ours have to plan for in the coming years. Why are so many people in need of in-home care? Let’s take a look.

The Affordable Care Act has brought basic healthcare to more people than ever before. A person who is able to seek out healthcare at an affordable price is more likely to visit the doctor for check-ups and get small problems taken care of before they become big problems. Of course, with more people having access to healthcare, the need for nurses to help these people is also growing.

While you’ve probably heard about the nursing shortage in the news for the last few years, it’s actually been a growing concern that could have been addressed years ago. After all, nurses age at a constant rate just like everyone else does, so taking a look at the start dates of large numbers of nurses in the 1980s is a pretty good indicator of when they would be retiring 30 or 40 years later. The average age of a nurse is 50 years old, meaning that many of them are heading for retirement before too long.

What kind of problems will this cause? Well, with fewer nurses around the cost of home care assistance could increase. But the care could also get better since nurses with more experience might be enticed to stick around. After all, nurses themselves are living longer than ever before. Knowing this, they might put off retirement far beyond the age at which their parents retired. And speaking of people living longer…

The Population Is Aging

We’re all living longer, and most of us would agree that that’s a good thing. Instead of dying of relatively simple cancers and what are today easily-fixed organ problems, people will survive many health problems that used to take them out at a much earlier age. Combine that with vaccines, better nutrition, clean water, antibiotics, and early-warning tests and you can see why people are living longer than they ever have before.

Let’s say that you were a senior living in the 1920s. If you made it to age 60 people would be commenting about how long a life you’d led. But a senior living today can expect to live nearly 20 years more, to an average of more than 78 years today.

On top of that, there’s also the Baby Boomers to contend with. The US population exploded after World War II as servicemen returned from the war and started families. Most Baby Boomers are now over 70 years old; if they don’t need at-home care now, they’re certainly going to be needing it soon.

The Diseases of the Elderly

Some diseases can affect people of any age, but for the most part many common diseases — cancers, heart disease, Alzheimer’s — tend to affect people as they get older.

What does that have to do with senior home care? Well, up above we talked about how people are living longer. And as they do, it’s not just “old age” that causes them to need healthcare. As people live longer, they are more likely to get diseases that affect the elderly. When a person in the early part of the 20th century had a heart attack, they simply died and didn’t need any more care. A person who suffers a heart attack at age 50 today might live for another 30 years, requiring at-home care multiple times as they have more problems. In short, living longer is nice, but it also means that more people are reaching ages where health problems requiring homecare services (and therefore nurses) is almost inevitable.

Fewer and fewer physicians are becoming primary care physicians and family doctors. Not only is the pay lower, but the status isn’t as high as that of, say, a surgeon. As the law allows (it differs by state), many nurses are stepping up and training to become nurse practitioners. They are able to provide most of the diagnoses and care that PCPs do, including writing prescriptions.

While it’s awesome that nurse practitioners are gaining responsibility and becoming even more skilled, this also means that a nurse who takes the role of a family or pharmacy physician is no longer working in other locations such as emergency rooms, pre- and post-op, and home care agencies.

Can Anything Be Done?

So, can anything be done to help the nursing shortage? The good news is, we know it’s coming. We’re not just going to wake up one day and find that all 2.7 million nurses have disappeared. Nurses will retire, yes, but nurses are being released into the workforce multiple times a year. More men are also getting into nursing as traditional gender roles are breaking down.

The bad news is that new nurses aren’t replacing the retiring ones quickly enough, especially considering that more people need home healthcare every day and the US population increases. (We also lose decades of experience as older nurses retire, something that can’t be ignored.) More nursing schools are opening, but they’re filling up fast. That’s a good thing, but can they provide the number of nurses that the country needs? Only time will tell.

The healthcare industry has gotten the word out that nursing is in demand. While there might be a nursing shortage for a while, we have confidence that the situation will get better.