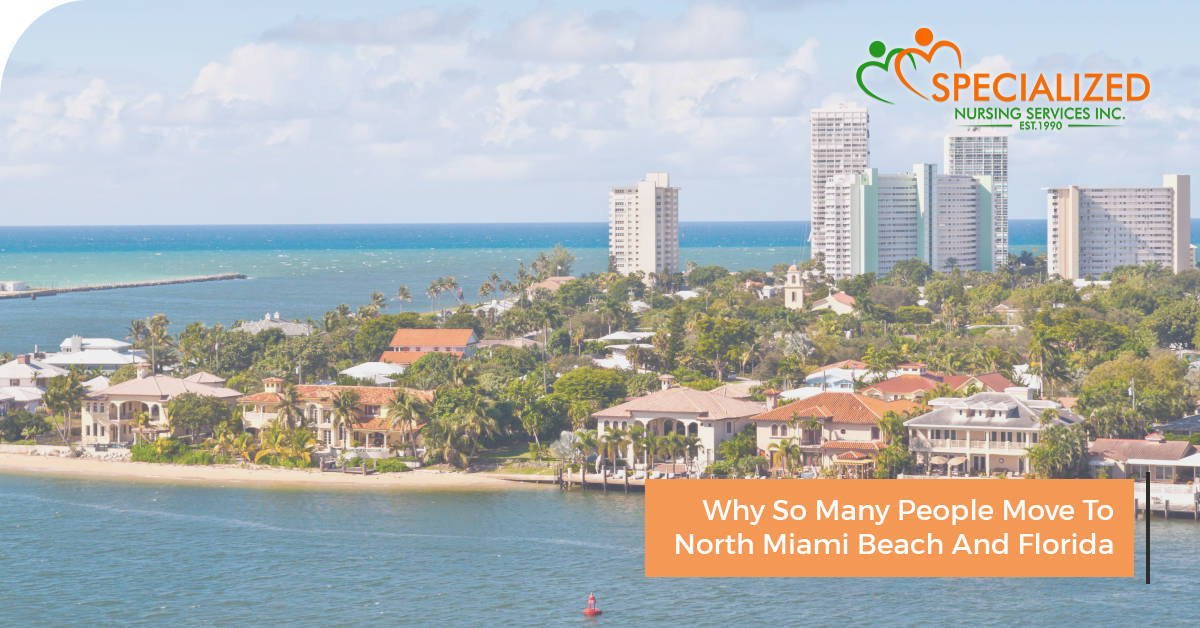 Why So Many People Move To North Miami Beach and Florida

Despite it being such a nice place to live, we’ve all heard the jokes about Florida. Not surprisingly, many of the jokes have to do with how it’s full of old people. And you know what? There’s a certain truth to that. Florida does have the highest population of people over the age of 65, at 17.6 percent (that’s two percentage points higher than the next highest state, Pennsylvania).

While Florida is starting to get some competition from warmer Western states (we’re talking about you, Arizona), it’s still one of the most common places for seniors to move. While they might not need elder care services or at-home care as soon as they get here, many of them realize that they are making the final move of their lives and are ready to make Florida their home. Here’s why Florida is still a top pick and why more than 250,000 people move here each year.

The Stuff To Do

Like we said, not everyone who moves to Florida is in immediate need of a home health agency. Many seniors move here well before they’ll ever need in-home healthcare, and, in fact, aren’t even thinking about it yet. For two or more decades they might simply be in Florida because of the great activities that seniors can engage in. While most don’t surf, there are many opportunities to boat in both freshwater and ocean water. Hunting might be in their past, but fishing fills the void. And guess which state has the most golf courses. Yup, it’s Florida with more than 1,000. If someone retires and they’ve been dreaming of walking on the beach every day, then they’re going to be very happy with living here (663 miles of beaches!). All of these fun activities can better a person’s health and actually put off the need for senior home care.

The Grandkids Will Come To You

When you move to Florida, you seldom have to leave to see anyone. That’s because everyone wants to come to you! Even if the seniors themselves aren’t all that interested in scuba diving and theme parks, Florida is a place that most everyone wants to visit. Grown kids and grandkids will be more than happy to come and enjoy the beaches, riding trails, golf courses, and, of course, Disney and Universal Studios.

Having a reputation for being accommodating to seniors can snowball. Once you become known as a state that welcomes seniors, more seniors move there, which means that more facilities are built specifically for them. First a senior might move into a high-rise because of the included golf course, then seek out an apartment built with wheelchair access. After they age out of that, they have a room waiting for them at an assisted living facility.

It’s not just the accommodations that are accommodating! There are entire industries that are ready to serve folks as they age. Would you be surprised to know that Florida has a high number of dentists offering dentures? Or surgeons who are experts at hip replacements? Or, in our case, companies that offer experienced home care assistance?

Florida is warm; it better be, since it’s known as the Sunshine State. In fact, it’s one of the warmest states year-round, and five of the top 10 warmest cities in America are in Florida. (Many of the others are in Hawaii, but that state is too expensive for many people to live in.) What might be extremely hot for a young person is much more comfortable for someone who’s getting up there in age.

Here’s another physical reason that people move to Florida. Much of Florida is just above sea level, with the highest point in the state being only 345 feet higher than the ocean. That means that the air is more oxygen-rich here than in many other states. While that might not be a problem for most people — a few thousand feet above sea level doesn’t bother most Americans — anyone with a breathing condition such as COPD might find Florida more comfortable.

Ask someone to tell you what they know about Florida and the tax rates will most likely come up. Florida doesn’t have an income tax, which makes it inviting for both seniors who are working and those who are younger and employed. Florida doesn’t have a state estate tax, allowing seniors to leave more to their children when they die. Florida also has very good property tax benefits if the home you purchase is a primary residence.

How does Florida make up for these tax breaks? In a word, tourism. Nearly 100,000,000 people visit Florida each year, and more than 10% of those employed in Florida owe their jobs to the tourism industry. Having eight of the top 20 amusement parks is certainly a good start, but the beaches play another big part. Fishing tours, diving, and other water activities also draw a lot of people to the state. It’s also one of the most-popular jumping off points for people going on cruises.

You know what, sometimes our clients don’t move to Florida, because they’ve been here all along. There are over 20 million people living in Florida, and it’s pretty obvious that they’re not all retirees. Some have worked at the tourist attractions, for the state, or at our universities. Others are here to take care of those needing healthcare, such as the caregivers who work at our home care industry. Many Florida citizens are more than happy to become Florida retirees!

Here at Specialized Nursing Services, we’re very pleased to work in Florida. Doing so allows us to meet people from all over the country who have moved to Florida. As we perform our home care and senior companion care, we’re able to hear about their experiences and what brought them to our wonderful state.

PrevPreviousWhy Home Care Services Have To Be Concerned With a Nationwide Nursing Shortage
NextWhen Is Senior Companion Care No Longer an Option?Next